So I was in London over the weekend.

For those who don’t know, the city was briefly and thoroughly assaulted by Storm Emma (best name for a storm), or the Beast from the East (less good, but still pretty good). I got in on Friday when the worst of the snow came through, making travel in and out of the city nearly impossible – but I got in just in time to make it to the city before the South West Trains shut down and the metro got super crowded with people trying to escape. I got lucky there.

You’d think that a blizzard over the weekend would be enough for me to cancel my trip. But I had tickets to Hamilton on Saturday night. Lin-Manuel Miranda’s beautiful, life-changing brain baby was worth braving a blizzard for.

When I got in, the British were panicking and fleeing the city before the trains stopped completely – I heard later that a lot of people ended up stranded anyway – but I was staying within walking distance of Victoria station so as long as I was willing to walk outside in the freezing cold then I wasn’t going to get stuck anywhere.

It was a tricky situation: on the one hand, my hotel room was pretty dodgy and I didn’t want to spend more time there than I had to. But on the other hand, it was REALLY cold outside. I used to think that ‘blistering wind’ was hyperbolic, but I copped a face full of literal snow when I stepped out of the station and my cheeks were pink for the rest of the weekend.

After a while, I did trek out to King’s Cross for the periodical pilgrimage to Platform 9 3/4, then to London Bridge because I was curious about what the Thames looked like in the snow. It was dark, cold, and ethereally beautiful. I bought a niffler for my mate Nicolle and a hot chocolate, and I cuddled with both on the bridge while I watched the ships pass underneath. 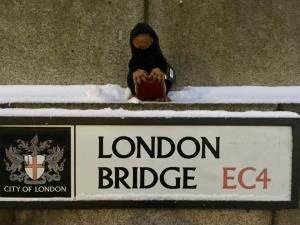 One thing that I really, really enjoyed about the blizzard was the complete lack of people in London over the weekend. I went to Buckingham Palace on Saturday morning and it was completely dead. No one. Not a single person. It was so dead that I could get right up to the fence and put the niffler between the bars so that it looked like he was trying to get in. Which was super cute. In fact, as the weekend progressed I realised that the lack of tourists meant that the niffler and I could have adorable photoshoots all over London!