WARNING: Here there be spoilers!

In Netflix’s The Good Place, that’s exactly what is happening to the main characters; Eleanor, Chidi, Tahani, and Jason. The series is dense with philosophical questions, like what does the afterlife look like? What makes a good person? What do we owe to each other? The way the series explores these questions is fascinating. Philosophers and popular media have drawn connections between the series and Kantian ethics, Existentialism, and Virtue ethics.

Here’s a quick breakdown of the series’ plot:

The Good Place is a version of heaven where those who have been good throughout their lives go after they have passed away. Eleanor Shellstrop arrives at the Good Place after she is killed in a freak accident and realises that Michael, the architect in charge, made a mistake. He has mistaken Eleanor for someone else. She doesn’t deserve to be there. With the help of Chidi, Eleanor tries to right her wrongs and earn her spot in the Good Place.

At the conclusion of season one, Eleanor realises that they were all in the Bad Place the whole time – Michael the architect is actually a demon in charge of overseeing a new version of psychological torture where humans torture each other with their personalities. Season two revolves around the humans and Michael trying to legitimately get into the Good Place while avoiding detection by Michael’s superiors.

Now, I’m certain that there will be academic breakdowns of the Good Place over the next few years detailing how the series incorporated and simplified (and misunderstood) various philosophical concepts. Here, I want to very briefly explore Cartesian scepticism and its place in the Good Place, because that’s something that I enjoy doing on quiet Sunday afternoons.

Rene Descartes was the philosopher who came up with the classic quote ‘I think, therefore I am’. His theory was that even if the rest of the world and humanity – and even his own body – were nothing more than a simulation, he could be certain that he was real because he could make thoughts. To make sure that his thoughts were his own, he examined them to figure out where his basic assumptions came from and interrogated them carefully. That’s where we get Cartesian scepticism.

Descartes came up with the idea of an Evil Demon who is controlling reality and trying to deceive him. This concept has been explored in other popular culture (The Matrix, anyone?) but in the Good Place, there is a literal evil demon whose job it is to trick the humans into believing they’re in a particular reality; Michael, the architect.

Explorations of the Cartesian Evil Demon often examine the effect that the dream has on the humans, but what about the demon? What happens to the demon when they see the humans they are deceiving in the simulation they created? 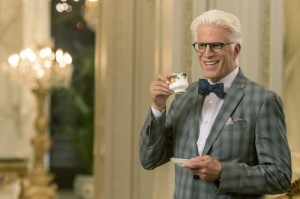 Generally speaking, the demon is considered a spectator. That’s the way it was in The Matrix. That’s the way that Descartes conceptualised the character. But in the Good Place, the demon in charge of deceiving the main human characters lives in the simulation with them. He not only sees them engaging with the problems that he throws at them, he engages with them himself and plays an active part. Later, in season two, he is forced to take part in Chidi’s ethics classes – a requirement of the truce he forms with the humans.

In the Good Place, demons are generally engaged in judging humans for their moral transgressions and feel no need to be morally good themselves. Michael, because of his deal with the humans, is forced to learn the basics of human ethics.

Not only must he learn about human ethics, he needs to display them in practice. The humans make Michael question his assumptions about ethics and hold him to a higher standard of behaviour because they are acting as a team. When Michael engages with the demons in the Bad Place, he has no reason to behave ethically. In fact, the demons in the Bad Place encourage him to behave as badly as possible. But the humans force him to become better.

Consider the Trolley Problem episode. Now, I’m not sure if this episode really explains the concept of the trolley problem as well as it could have, but the concept itself is not nearly as interesting to me as the illumination of Michael’s character. In this episode, Michael takes Eleanor and Chidi through a series of simulations – forcing Chidi to make decisions about who to kill in different scenarios so that Michael can see the ethical implications of the trolley problem in practice. Of course, it turns out that Michael didn’t need to see the trolley problem playing out. He just wanted to ‘let off a little steam’ and torture Chidi.

This episode ends with Michael engaging with several ethical problems and concepts, though none of them are as explicit as the trolley problem. He learns about trust; he learns about the importance of honest apology over bribery; and, he learns that off-loading moral responsibility doesn’t make problems go away.

Similarly, in ‘Janet and Michael‘, and ‘Derek‘, Michael is faced with decisions about whether to kill the artificial intelligences that help run the simulation, but finds that he can’t do it. Well, he can’t kill Janet, at least. Because she is his friend, bringing in concepts of ethics of care and accountability. When it came to killing Derek, he doesn’t appear to have any problem with it. The only problem he faces in that episode is the fear that his actions may cause pain – in a roundabout way – to Janet, Jason, and Tahani.

As the series progresses, Michael confronts and examines many of the behaviours that he had learned were appropriate, much in the same way that Descartes confronted and examined his assumptions when he was conceptualising the Evil Demon and his power over humans.

Eventually, Michael becomes more and more ethically robust, to the point where he decides to sacrifice himself to the demons of the Bad Place to give his human companions time to try their hands at getting into the Real Good Place. Michael takes his ethics of care a step further into more altruistic paths by extending his moral accountability from his small inner circle to all of the humans in the Bad Place.

“The premise of our system is that a person’s score during her time on Earth is final and inarguable, but because of my accidental experiment, these four humans got better after they died. That’s not supposed to be possible. Over and over again, I watched as they became thoughtful and generous and caring… If I’m right, the system by which we judge humans the very method we use to deem them good or bad is so fundamentally flawed and unreasonable that hundreds of millions of people have been wrongly condemned to an eternity of torture.” – Michael, ‘Somewhere Else‘, 2.12

This is only a few episodes after he tried his best to kill Derek because Derek could have gotten them all in trouble.

So in this way, being around humans did not just make Michael more caring of those specific humans – it made him more caring of others in general. Which was something that no one in the beginning of the series could have anticipated.

Initially, the Good Place begins with the nihilistic premise that humans can be used to torture each other. Over the course of the series, we see that humans in fact drive each other to be better. They work together, they improve each other, and in doing so they also have a positive effect on a thousand year-old demon who had been raised in the ethically toxic Bad Place environment.

It suggests that moral growth is a decision that we can make for ourselves, and that making that decision is easier when we are around people who hold us to a higher standard. It shows a group of characters from different backgrounds (backgrounds that are used to excuse a lot of bad behaviour), thrust into a situation that was designed to make them worse people, and how they rose above it to become better through thoughtful reflection and action.

What I love most about the Good Place is that it is an optimistic look at the healing power of human philosophy and ethics. Michael’s transformation from Evil Demon to Good Person demonstrates that change.

One thought on “The Good Place and Descartes’ Evil Demon”