Yuri!!! on Ice is an exciting anime series. It can be read and analysed in so many different ways, and can offer such a wide range and scope for understanding and analysis, that I can’t possibly touch on everything I’ve seen in one blog post. Nor do I want to. But I have been re-watching the series and it’s made me want to gush a little bit about it, so I’m going to go ahead and do that here.

I’m going to write a bit about some of the themes I’ve seen in the series, what relationships and themes that I can see it and connecting with in sports anime in general, and I’m going to explore a couple of theories about how I think the anime holds up to others.

Now, I’d like to make the distinction before we begin between homoerotic and homoromantic, because I think sports animes tend to move between the two.

Homoromantic, on the other hand, is more romantic in tone. It is less of a physical connection and more of an emotional one. Romantic behaviours can include cuddling, sharing emotional bonds, and supporting one another. Naturally, these behaviours can be platonic – just like erotic behaviours can be platonic. The thing is, when we see a man and a woman cuddling on the couch, or inspiring each other to be better at their chosen field because they care about one another’s happiness, we as a heteronormative society tend to assume a romantic undertone. Even if it is very slight or unintentional. So when I say that these behaviours in sports anime can be considered homoromantic, what I mean is that these behaviours, in the context of a society that has categorised these behaviours as romantic through repeated performances in popular culture, can be read as romantic even if they are intended by the artist or producer as platonic.

They’re bromantic, if that is the word you prefer.

Similarly, in Kuroko no Basuke, we have a set up with Kuroko and Kagami. Kuroko brings out Kagami’s natural talent by being the ‘shadow to his light’, while Kagami’s talent allows Kuroko to develop more techniques and brings out his competitive side. Prince of Stride: Alternative has a series of bromantic pairings based on the way that the men work together as well as the considerable drama and backstory behind them. 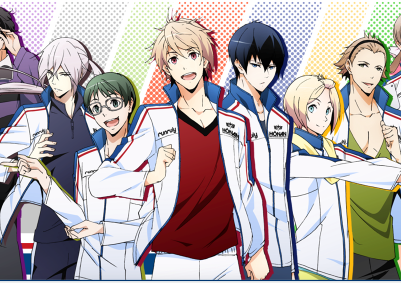 This mutual support and active desire to improve each other is a key component of the sports anime genre.

The homoeroticism is clearer in some shows than in others, and I think we all know what I mean when I say this.

It’s the sort of show that seems to have been designed with fanservice in mind. They even included a female character, Goh, who acts as a stereotypical, boy-crazy fangirl who draws even more of the audience’s attention to the beautiful muscles that the swim team has.

She doesn’t seem to be a yaoi fan, because she doesn’t have a similar reaction when she believes that Rei has a boyfriend in season two. But she is a very big fan of half-naked men.

They don’t need to include yaoi fans in the show because the audience knows. 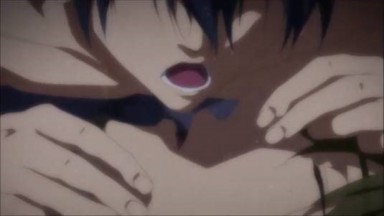 There is a significant lack of female love interests in the story and some characters – particularly Haru and Rei – seem to act predominantly as asexual. But the situations that they’re put in and the way they’re drawn gives the impression of homoeroticism even when sexual contact is completely lacking in the show.

Interestingly, Free! has a legit no-homo moment in season two, when Rin and Haru have to share a bed.

In sports anime, you can either have a series which is entirely devoted to the protagonists – with very little information given about competition unless it directly affects the story. This is seen in stories like Kuroko no Basuke, where even the other characters in the team aren’t given as much screentime or backstory as the main duo and the Generation of Miracles.

Yuri!!! on Ice follows Haikyuu!!’s lead by giving each competitor an opportunity to show where they’ve come from, what they’ve fought through to get to the level they’re at, and what it means for them to compete on the same stage as our protagonists. The result is a richer, more realistic experience for the viewer who is introduced to a diverse range of characters.

It also offers the opportunity for multi-shipping, which is difficult to pull off without a well-rounded characters to work with unless the fans supplement the canon with fanon. 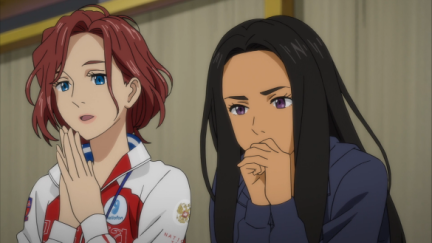 The series includes elements of non-sexual emotional bonding between men throughout, but I have a special place in my heart for Yuri Pliesetsky, so I’m going to use this as an opportunity to unpack his relationship with Otabek.

What we have here is a scene which could be read as romantic – everything from the sunset in the background, the way that Yuri blushes, and the fact that the following scene between the two of them shows that they’re in a restaurant using body language that would not be out of place in the context of a date. 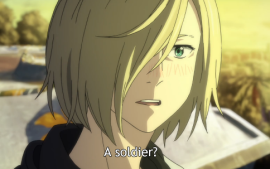 It’s not just the romantic framing of the art that interests me. The dialogue is interesting too. In this scene, Otabek offers Yuri a series of memories that demonstrate his motivation with regards to skating, his fears, and his admiration of Yuri. He then offers an emotional connection to Yuri in the most matter-of-fact way possible. This is, if nothing else, an example of the homoromanticism that is typical of sports anime involving younger characters. It is a gesture of friendship that blossoms into a beautiful bromance!

Homoreroticism is also very present in the anime.

We’ve got the clear sexual undertones of Yuri and Victor’s relationship, plus we’ve got Chris who is delighted by any opportunity to take his clothes off in front of other men. Chris is pretty next level with regards to sexuality, though, so I can’t really see how he’s an example of anything unless it’s at the very far end of the homoerotic spectrum. 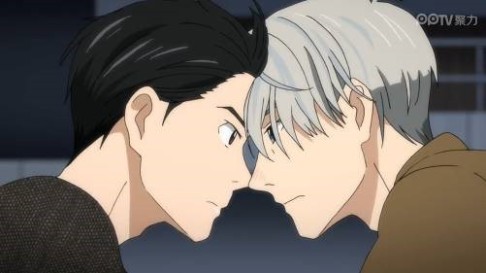 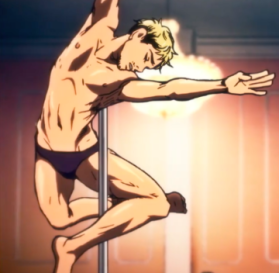 Yuri and Victor actually have a mutually supportive relationship, and both grow as people as a direct result of the other’s influence. This isn’t just a surface, under-developed yaoi relationship designed for fanservice. There appears to be a clear effort on the part of the creators to establish a believable progression of these two into a genuine relationship.

Yuri!!! on Ice does fit into the expected tropes of a sports anime, as well as appearing to recognise the fan communities which will likely spawn around it.

Yuri!!! on Ice does break away from the typical sports anime format by using an explicit narrative strategy from the romance genre: the classic misunderstanding of the love interests.

At first, the viewer thinks that the story is about an adorable Japanese skater whose hero shows up out of nowhere to offer to be his coach. What we learn in episode 10 is that this is not the case – that the story is actually about how Viktor, at a loss for what to do with his career, meets and is enchanted by Yuri and then uproots his entire life to coach him. This follows in a similar line to classic romantic novels like Pride and Prejudice, where we have an unreliable narrator giving us their opinion of events, only to have their love interest come in and say: well, actually, it’s like this…

It’s important to note that this particular narrative strategy couldn’t have been possible in a typical sports anime because of one very important factor: the alcohol.

Yuri did not realise that he’d essentially seduced Victor at the banquet because he was blackout drunk at the time. And not just blackout, he was black out. There were sixteen empty glasses of champagne in front of him. Technically he should be dead.

It certainly explains why he legit has no idea why Victor is in Japan when he finally visits. And that facilitates the narrative misunderstanding. In a typical sports anime, the characters are usually highschool age. That particular narrative device is usually unavailable to them.

The alcohol-fuelled meetup sets up the romance between Yuri and Viktor by using tropes from the romantic genre. These tropes are then placed in the homoromantic space of sports anime. It adds an extra dimension to the story as well as explaining the somewhat unlikely – but narratively necessary – decisions that Victor makes.

He wasn’t being compulsive, he was head over heels in love! He was sure Yuri could dance Eros because he had seen the boy poledancing in his knickers! He was hitting on Yuri from the get-go because he’d thought that his behaviour would be wanted, even reciprocated!

And the big thing that sets this anime apart is, of course, that wonderful canon ship.

An argument could be made that their relationship is one of deep friendship, that Yuri and Victor have a strong platonic bond. Kubo sensei did make it canon in the paratext, but the author’s intention does not always need to factor into the consumer’s interpretation if we’re to take a reader-oriented approach to the situation.

The way I see it, the burden of proof is definitely on those who want to argue that the ship is not canon. There are just too many culturally-accepted romantic situations in this anime. If someone wants to read it as friendship, then they actually have to work really hard to explain why that is. 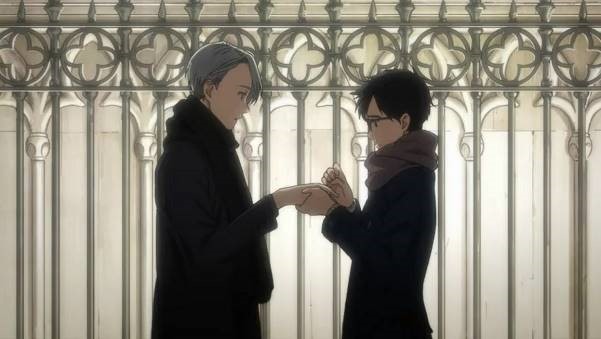 Victor refers to the rings he and Yuri share as engagement rings in canon, and promises that they will marry when Yuri has a gold medal around his neck. If someone wants to read that as friendship, then they actually have to work really hard to explain why that is. This is unlike the typical sports anime, which offers fodder and multi-ship potential for its yaoi fans, but still keeps things grey and technically platonic.

So what comes next? The thing is, because Yuri!!! on Ice has so many significant differences between it and other sports animes – the fact that the characters are older, the fact that the explicit sexuality can be developed more actively that it could be developed with younger teenaged characters – means that it is possible that Yuri!!! on Ice won’t change anything for the genre. It might be that, in the future, sports animes will continue to remain a source of multi-shipping potential, but not a space where actual, genuine LBGTQ+ representation can be found.

It may be hinted at, but never explicitly stated, which would be disappointing.

But I hope that’s not the case. I hope that the sheer magnitude of Yuri!!! on Ice’s popularity will convince creators that the traditional sports anime format has space for this kind of representation. I hope that in the future there will be a space for more sports anime to incorporate younger LGBTQ+ characters, to show them emotionally bonding with people of the same gender without the need for alcohol and onsens.

But in the meantime, we have achieved at least one small Victuri!