I’ve been living in Utrecht for three years now. It’s the fourth largest city in the Netherlands; a university town with medieval canals crawling through the streets and a gothic bell tower smack bang in the centre of the city.

Utrecht is Amsterdam without the tourists or the weird weed smell – it is all old-school cobblestones and tulip gardens and bicycles. The name Utrecht is a combo of two words: the Latin word ‘traiectum‘, which is a word that the Romans used to indicate a place where the river could be crossed, and the Old Dutch word for ‘downstream’ – ‘uut’. There’s also an urban legend that the area behind the Dom Tower was a secret rendezvous spot for homosexuals in the 1700s.

There’s even a Miffy museum. Miffy (or Nintje in Dutch) is a big icon in this town. Miffy is adorable.

In my continued quest to find my dog’s exercise sweet-spot (the amount of walking we need to do before he finally calms down), I’ve gotten to know my adopted city rather well.

In particular, I’ve gotten to know the wide range of beautiful fauna that has been cultivated over many years to ensure that the town bursts into bloom during spring – even despite the grubby weather. 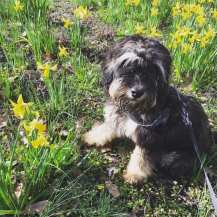 My beloved Edmund posing with some daffodils

The winding paths are built for long strolls. During spring and summer, the leaves on the trees act like a canopy that blocks the sunlight and makes you feel like you’re walking through a fairytale. Hidden bridges and rolling canals continue this feeling. 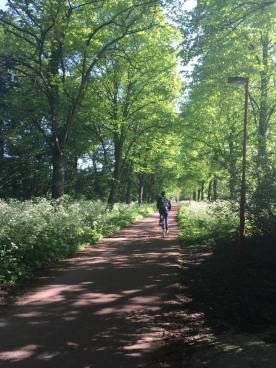 And don’t get me started on how the sky sometimes goes full unicorn! 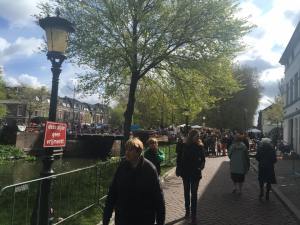 Edmund and I like to walk through the city, where people tend to pack themselves in on the generous footpaths. The city was built for cyclists (like every other city in this country) but pedestrians are also ever-present. On cold days, people are huddled together with heavy-looking coats and thick gloves, and on warm days they tend to flock towards shirts and skirts that can given show off their tans. Because tans are a big deal in this country. Any time the temperature creeps towards the 20s, I’ll inevitably see some half-naked Dutchie stretched out on the grass.

Typically, Edmund and I walk for about half an hour in the morning and forty minutes at night. I’ve met a lot of the local dogs – they’re all more well-behaved than Ed is, but he’s a puppy desperate for friendship. Even the cats are not safe from his overtures!

One thing I do really like, more than the colours and the paths and the animals, is how quiet it is here. There are loud crowds in the centre, but just five minutes away from the centre the air is clean and clear of distractions. Noise is limited to birdsong and the occasional sounds of children playing. It’s peaceful here. It’s very easy to get lost in your own thoughts as you’re walking through the streets.

In fact, often I’ll forget that I’m even walking until I look down and realise Ed is trying to eat a Red Bull can.

One thought on “Walking through Utrecht”