I’ve been trying to wrap my head around how the Good Place tallies its points. That isn’t to say that I didn’t understand the reasoning given on the show. I just didn’t like it. I wanted to figure out how a person gets into the Good Place – either now, or 500 years ago.

The main thrust of the first season is that motivation is the deciding factor around whether or not someone gets into the Good Place.

As the Judge tells the crew: “I still believe that the only reason that you improved in Michael’s fake neighbourhood is because you thought there was a reward at the end of the rainbow. You’re supposed to good things because you’re good! Not because you’re seeking moral desert.”

This was justified in the story when Eleanor did good things to try and get into the Good Place, but she didn’t earn any points because she extrinsically motivated.

Because that seems like a contradiction to me. How is it that motivation is important in some cases but not others?

Moral motivation is an instance of a more general phenomenon – normative reasoning.

“… a distinction is commonly drawn in contemporary debates between two kinds of reason: “normative” and “motivating” reasons…A normative reason is a reason (for someone) to act—in T. M. Scanlon’s phrase, “a consideration that counts in favour of” someone’s acting in a certain way (1998 and 2004). A motivating reason is a reason for which someone does something, a reason that, in the agent’s eyes, counts in favour of her acting in a certain way… we can ask whether there is a reason for the government of a country to tax sugary drinks (normative), and ask also for the government’s reason for actually taxing the drinks (motivating)” (Stanford Encyclopedia of Philosophy)

It’s a small distinction but it matters in the long run. Moral motivation is based on the morals and values of a person. Morals or values are about the inner judgments about how a person actually behaves; ethics are usually associated with theoretical aspects of how you should behave.

How does motivation/action work in the Good Place?

Tahani’s actions brought an extraordinary amount of good into the world; she raised over sixty-billion dollars for charities in her lifetime. The flow-on effect of those actions would have been substantial. But her actions are invalidated by her motivations, which were, in her own words, ‘corrupt’. Since she didn’t care about the people she was helping, the Good Place does not include the people she helped in her overall tally.

Chidi, by comparison, literally devoted his life to trying to ethics. In particular, he concentrates his efforts on making the ‘most’ ethical choice, though he doesn’t appear to have a specific ethical framework that he subscribes to. As a result, he spends most of his time going over the various philosophers’ perspectives and how they can apply to his situation. It looks absolutely exhausting, but it comes from a good place – he wants to do the right thing.

However, as far as the Good Place is concerned, Chidi’s motivations are meaningless. What matters is the net result; how much the world benefits or does not benefit from his behaviour. In Chidi’s case, his indecisiveness makes the people around him miserable. It doesn’t actually affect the world, but the people in his immediate circle are affected and that is what matters.

So why is it that motivation matters in Tahani’s case, but not in Chidi’s? Why is it that the Good Place is seemingly applying different measures of success to different humans?

The obvious answer is: because they want people to fail. Or, rather, the Bad Place wants people to fail. With the Judge out of the loop, it is easy to manipulate the system. And motivations do affect the action being taken.

I’m still not happy with this explanation, though. Because Good Place accountants never picked up on it. They might have realised that people were finding it harder to get into the Good Place, but they do not seem overly worried about it because from their perspective the numbers still make sense.

Why is that? Why do these arbitrary decisions make sense?

See, this may not be as arbitrary as it looks. In the context of The Good Place, it is the results of actions that seem to be the important factor. Motivation is a secondary factor and must be intrinsic – you must do good things for good reasons to get into the good place. I think that there’s a sweet spot between good actions and good motivations that will get you into the Good Place. 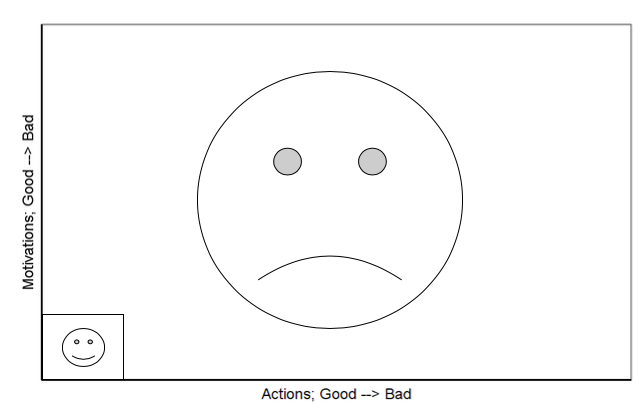 This becomes much clearer when you consider that the Good Place also takes into account unintended consequences; ie, the consequences of actions after the fact.

So even if you have every reason to believe that you are doing the right thing, and the action itself does not have explicit negative results, you are still screwed after you take into account things like how the world currently works.

As Michael realised in the third season, ethical consumption is impossible under capitalism; there is always someone who is getting screwed in the capitalist process. If it is not a someone, it is a something (an animal, the planet, etc). The vast majority of actions have a net negative effect, and that in turn skews the results. No one gets into the Good Place because they are not fitting into the small area on the graph that will get them there.

I think this makes sense as a way to explain how The Good Place engages with morality and action, and how it justifies certain narrative decisions.

What do you think?