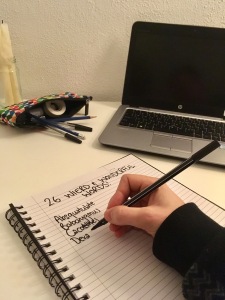 Here’s the plan: one flash fiction story, 100-500 words, every week for the first half of the year! Each story will be based on a weird and wonderful word.  Watch this space!

Absquatulate – to leave somewhere abruptly
Borborygmus – a rumbling or gurgling noise in the intestines
Cacoethes – an urge to do something inadvisable
Deracinate – to tear something up by the roots
Ensorcell – to enchant or fascinate someone
Famulus – an assistant or attendant, especially one working for a magician or scholar
Gasconade – extravagant boasting
Hodiernal – of today
Ingurgitate – to swallow something greedily
Jumbuck – a sheep
Kenspeckle – conspicuous or easily recognisable
Logomachy – an argument about words
Mumpsimus – a traditional custom or notion that is adhered to although it has been shown to be unreasonable
Noyade – an execution carried out by drowning
Orrery – a clockwork model of the solar system, or the sun, earth, and moon
Pother – a commotion or fuss
Rubricate – to add elaborate capital letters (typically red ones) or other decorations to a manuscript
Snollygoster – a shrewd or unprincipled person
Triskaidekaphobia – extreme superstition about the number thirteen
Umbriferous – shady
Velleity – a wish inclination which is not enough to lead one to take action
Wayzgoose – an annual summer part and outing that used to be held by a printing house for all its employees
Xenology – the scientific study of extraterrestrial phenomena
Ylem – (the big bang theory) the primordial matter of the universe
Zetetic – proceeding by inquiry or investigation